Cam Long Down is a long narrow hill that’s detached from the main Cotswold escarpment. It’s difficult to describe where it is so the simplest explanation is that it’s between Dursley and Uley Bury.

The photo below shows Cam Long Down and was taken from Downham Hill. Cam Peak and Dursley are to the left, while to the right is the Cotswold escarpment.

It has a smaller stablemate to the side of it also in no mans land called Downham Hill, more of which later. The views from the top of Cam Long Down are amazing, as seen in the photo.

There’s a couple of ways to get to the long down. The Dursley end has a small car park known as Cam Peak car park that’s reached by heading down Long Street and turning up into Drake Lane. This is one of those ‘I hope I don’t meet anything coming the other way’ roads as it’s very narrow.

From Drake Lane turn right when you get to the junction and the car park is on the right. It’s also easy to get to from the Uley Bury car park but it requires a bit more effort. You’re into hill walking though, so it’s easy.

At the Dursley end of the long down is Cam Peak, or what I call the volcano as that’s the classical shape of the hill. It looks man made but it’s formed from natural erosion. The hike up it is worth it as the views from the top are great. The very top is currently fenced off (summer 2021) presumably to let the top recover from the damage caused by many walkers. The hillside in the photo looks very brown as its just had all the bracken cut down. 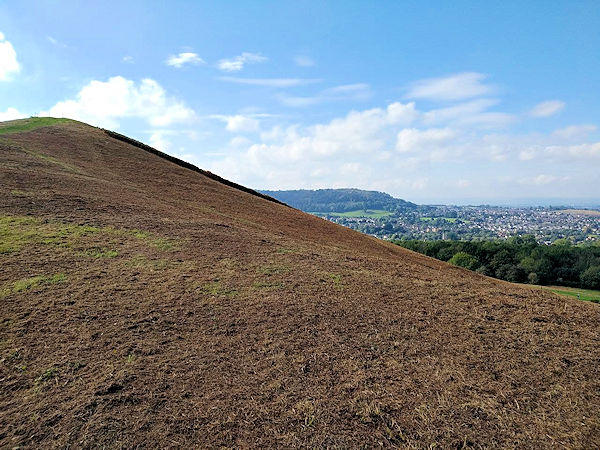 The metal structure at the top of the peak is a bracket that holds a large cross that’s carried up the hill at Easter.

After this detour, head back down and on up to the long down. The views are great and on a clear day you can see over to the Welsh hills and the two seven bridges. Other delights in the view are the the new incinerator, the Muller factory (previously known as the milk marketing board) at Stonehouse and the old Berkley nuclear power station.

If you want a short circular walk go to the far end of the long down and take the zig zag descent. Instead of going over the style into the steep field keep going and down a few steps.

This takes you back to the car park along a lower wooded section. This is quite muddy and slippery when it’s wet so wear some ‘sensible’ shoes or your wellies in the winter.

Obviously you could just double back the way you came. This is a short walk of just under 2 miles.

When you get to the zig zag path at the end of the long down go over the style and down the very steep hillside. When you get to the road turn left. This will take you back to the car park via a quiet road. The road section takes a bit longer than you might expect as it takes a bit of an outwards loop. If you don’t know the area take a map or use the Open Street Map website on your phone.

A third option that takes in Downham Hill

Instead of turning left at the road, head in the other direction along the straight bit of road and turn right at the junction. Follow this road until you get to Hydegate kennels and cattery (this is where the dogs you might have heard barking are) and turn right. Keep going until you reach the kissing gate on the left. This is the entrance to Downham Hill seen in the photo below.

The fields here are home to retired horses and a sign explains all about them.

Locally, Downham Hill is known as smallpox hill as there was once a smallpox isolation hospital built on it.

Like the long down, this also has great views looking out towards Uley, Dursley and Wales and of course Cam Long Down. Along the top of the hill is an avenue of trees that take you to the far end of the hill that looks out towards Dursley with Uley to the left.

The only way back to the road is the way you came, but it’s a much smaller hill than the long down so it doesn’t take long.

Head back towards the kennels and there is a track on the left. This takes you to the section between Cam Peak and the long down. I’d take a map for this section as it’s not obvious where you’re heading as the trees obscure the view of the peak and the track splits a few times.

If it’s foggy at ground level, Cam Long Down and Downham Hill are sometimes high enough to be above the fog and in glorious sunshine. The photo was taken from Downham Hill on a foggy winters day and shows Cam Peak and Cam Long Down rising out of the fog. 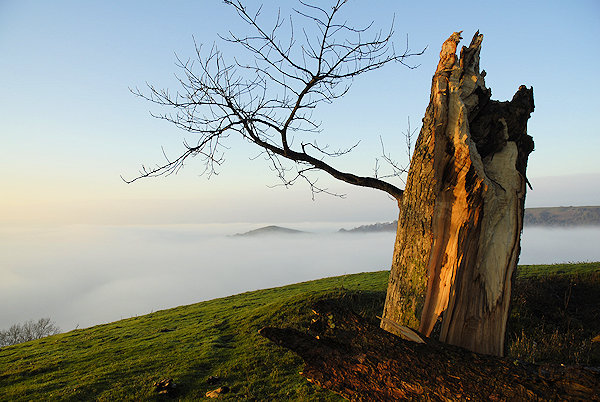 Uley Bury is a little higher than both so from the bury you might see a sea of fog with the avenue of trees on Downham Hill sticking out above it.

It’s quite magical when this happens!

For other great walks around Stroud look under the Walks menu.