Being stuck in the usual traffic snarl up getting into Stroud and wondering if it was really worth the hassle I remembered there was once a devious plan to build a flyover in Stroud and wondered if it might have been an idea way ahead of its time, or a completely bonkers idea brought on by too much substance abuse.

So I looked into it before all traces of it vanished into Stroud’s long forgotten history.

Back in 1965, people in the council offices were hatching a plan for a major Stroud bypass, code named The Slad Flyover.

The image below shows the proposed (ish) flyover and bypass route in red.

So, the Slad Flyover idea was born.

Unlike today, you couldn’t get from the Nailsworth or Cainscross side of town to the A419 that heads out towards Chalford without having to drive through the town centre.

The flyover was a proposed fix for this. Firstly, Merrywalks was to be widened, presumably to be wider than it is now.

The plan then gets interesting (or rather it gets tragic) as the idea was to demolish what’s now the old police station at the end of Merrywalks along with the British School on the Slad Road opposite. 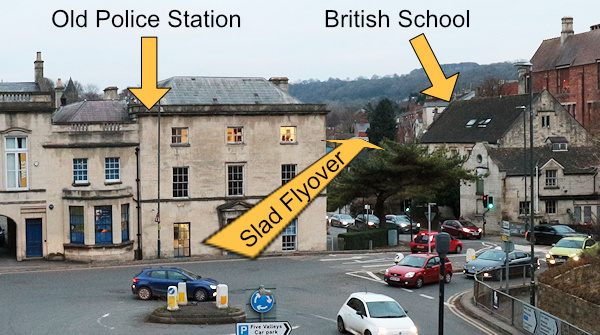 Taking a new road through the site of the old police station it was to cross the existing Slad Road rising 20ft on an elevated section that would have cut across what is now Lockinghill Hill and the health centre, passing close to what was once the museum on Lansdown (opposite the library) and on up between the new police station and St Laurence church.

The area between the church and police station is now a car park as the photo shows. Police station to the right, church to the left, obviously.

The road would then drop back down and rejoin the A419 where the new Cornhill section of road is. Obviously the flyover was only at the Slad Road section.

To facilitate the flyover and bypass the council started buying up buildings that were in the path of the route. Some of these buildings were listed. They were then left empty, contributing to the general run down look of Stroud back in the 70s.

A public inquiry in 1976 put paid to the flyover idea and was instead replaced with what we all now know as Dr Newtons Way, and the new road up to the police station called Cornhill. One of the old routes that took you all the way up the high street and on towards Bisley was blocked off at the top as the high street was pedestrianised.

So, in view of the current traffic problems would the flyover have been a good idea or not?

It would have funneled literally all the through traffic along Merrywalks which is already a major bottleneck.

If it were wider and didn’t have the businesses people turn in and out off like Mac Donald’s and the car parks (we won’t mention the bus station) it might be less congested, but there would still be too much traffic today for that stretch of road.

The current Dr Newtons Way bypass is perhaps the better idea, but traffic still grinds to a standstill on it during the rush hour.

Will the traffic ever improve in Stroud?

Probably not. There’s a lot of housing being built or proposed on the outskirts of Stroud such as at Wallbridge, Rooksmoor Mills, the Daniels Trading Estate and housing by the new Lidl at Cainscross.

The old Brimscombe port is also ear marked for housing. The industrial units are currently being demolished on that site and more housing is going up at Wimberly Mills. That’s the old Critchely site near the Toadsmoor turning on the A419.

This is all going to dramatically increase the traffic heading into and out of Stroud, especially during the morning and evening rush hours and school run times.

The Times recently said Stroud is one of the best places to live but like a lot of places now you need the patience of a saint to get in and out of it at times!

A Look at the Rooksmoor Mills Development

The Wallbridge Development in Stroud

Work Starts on the Lidl development at Dudbridge

Demolition of the old Bensons Factory