Stroud, the place that keeps getting the top vote as the place to live appears to have a major problem with it’s toilets, which could put a dampener on things.

Not the toilet paper problem that we had at the start of the pandemic, although that was pretty scary. This appears to be worse.

A stream of posts on social media and in the comments to articles in the local rag keep bringing up the toilet problem, constantly.

A sample is below on something about the grand opening of a new shop in the Dransfield shopping centre: 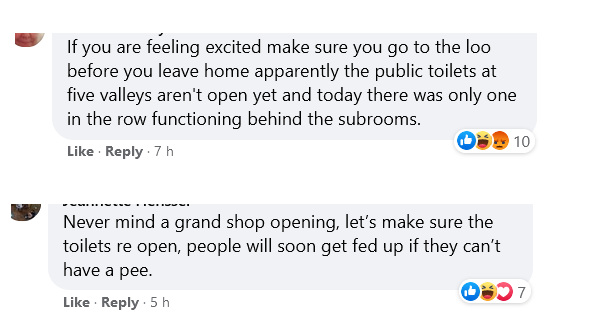 The major issue appears to be with the ones in the shopping centre as they’re closed (I haven’t checked) which contravenes some sort of toilet act passed by Henry the 8th many years ago.

The other loos in town have also been closed due to Covid.

I can report that one of the loos in Stratford Park is now proudly displaying an ‘Open’ sign although that’s bit of a hop away if you’re bursting. I was never convinced by the lock on one of those.

In the meantime, a solution to Toiletgate is to ask a policeman to shield you with his coat, which I believe they are or once were obliged to do.