Somebody on social media created a storm over the new development at Rooksmoor Mills as one part of the development has started to take shape.

It’s been described as an eyesore like Tricorn House (multiple times), a crappy office block and that it looks like a building for the Gestapo. The post received over 200 comments which for a local group in these parts is good going.

To be fair, it’s still little more than a building site at the moment so will change a lot over the rest of the year.

So far it doesn’t look that much different to the original artists impression which has been in circulation for a number of years. It’s always looked like it was going to be a fairly prominent development.

I’ve taken the original artists impression and turned it into an info graphic showing the current state of the development. The part that’s been built is the long section at the lower left that runs parallel to the road. The rest of the site is a big building site. 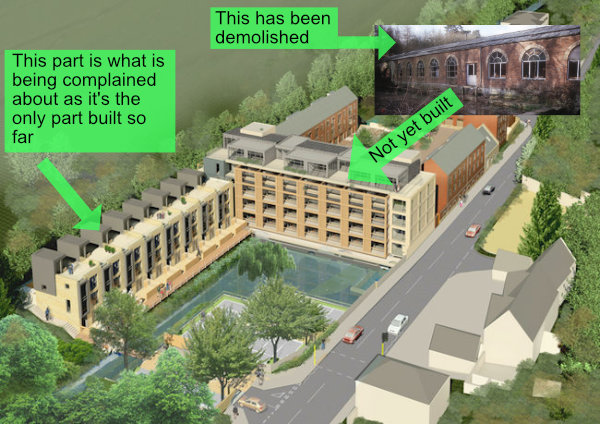 Another complaint on social media is that prices start at around £430,000 and that they ‘don’t even have a garage’. Flats often don’t have garages as they take up a lot of space.

This is how the estate agents describe the development:

The site itself is set within a mature landscape of trees lying immediately adjacent to the Cotswold area of natural outstanding beauty and within the Stroud industrial heritage conservation area. It will be transformed into a select development of individual, high specification new homes set in this desirable and convenient location close to amenities and beautiful open countryside.

The highlight section is mine, select development usually means expensive. Other comments are that with the building being so close to the road it will require the windows to be cleaned often and the prices are way too high for most people from around here to be able to afford.

Looking at the developers and the estate agents web site, price is a valid point as the guide price is £424,000 to £430,000. That’s a lot of money for a flat in a not very exciting part of the valley, so I’m not sure who the target buyer is going to be. Probably not many from around here.

Flats (apartments as agents like to call them) don’t tend to be good investments as they usually come with fairly short leases that often have to be renewed when you want to sell and expensive management and service charges can’t be ignored.

As a buy to let you might struggle to get a return as Stroud hasn’t quite moved into the mega wealthy league even though the agents describe Stroud as being the Covent Garden of the Cotswolds. That’s a new one on me!

This is going to be one to watch, along with whatever happens to Kimmins Mill.

This is a photo of part of the mill in 2008 which has been demolished. 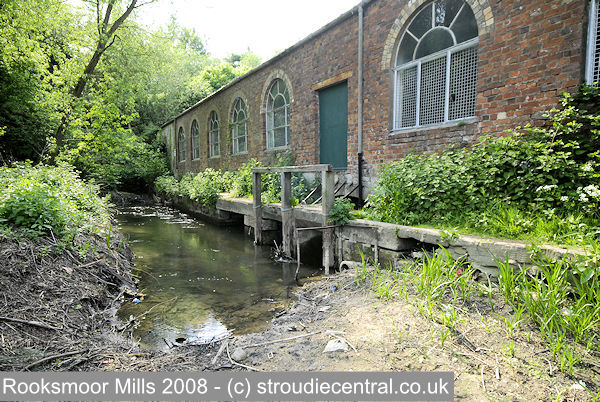 The estate agent dealing with the new development:
Savills Property Opens in a new tab.