According to a poster on the side of the metal Radiophonic Hut by the SVA (Stroud Valley Arts) building there will be a test transmission from The Edge of the World by the well known Jonny Fluffypunk.

Personally, I’ve never heard of him, but that doesn’t mean anything. He’s probably a really great bloke. 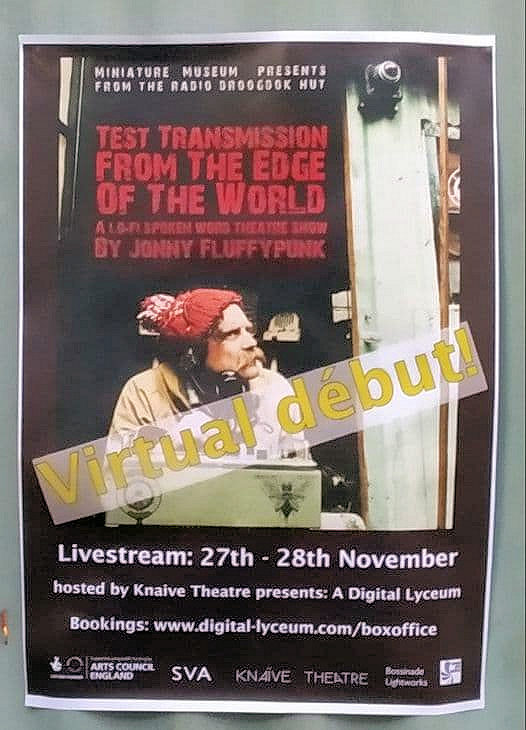 This sounds like an interesting project if you’re from the days of listening to radio before it all went onto distortion free FM as it recreates the old radio distortions.

Basically, anything transmitted on medium wave suffered from terrible fading so in the middle of listening to that song you’d been waiting all day to hear it would either fade out completely or go all distorted as the main signal got messed up by the same one arriving slightly later as it had bounced off something that had delayed it.

This was both a blessing and a curse as while the interference was annoying, it allowed you to pick up radio stations from far away places like Europe during the night when the signals bounced off the ionosphere.

There was no cure for the DJ deciding to talk all over the best bits though, no matter how they transmitted it.

This project is inspired by those past days of rubbish radio reception and the far off names on the radio dial that we might remember with fondness such as Hilversum or Luxembourg.

I doubt anybody in these parts ever tuned into ‘Hilversum’ but Radio Luxembourg was well listened to even though it played the same Peter Stuyvesant cigarette advert after every single record.

I went to Hilversum many years ago, ironically to install some equipment at the main TV station so it was nice to put a name to the dial so to speak.

The SVA gallery on John Street has lots of old valve radios on display so if you’re into that sort of thing pop along for a look.

Plus of course ‘the test transmission’.

A link with more info on the project which is worth a read as I went off topic somewhat. The projects an on going thing so the links still valid after the event.