Every now and again a film from 1971 called Dulcima pops up on TV staring John Mills as a farmer that falls in love with his housekeeper Dulcima. It has a somewhat tragic ending that involves the distraught farmer and his shotgun, but hey-ho.

When I first saw it, there were a queue of people waiting at a bus stop (in the film). Nothing unusual in that, but the place looked very familiar.

A little green single decker bus then appeared and on the destination board were the words Forest Green. The bus stop was next to the market house in Minchinhampton.

There are then shots of the bus winding its way through Minchinhampton and past a small truck that has Hilliers Pies written on it. Hilliers were once based in Newmarket, just out of Nailsworth town centre and were famous for pork pies and sausages.

Further shots in the film show the bus traveling across Minchinhampton common with the ever present cows, and then rounding that tight corner on the Avening road by the pub as the road climbs on towards Tetbury. This little bus gets about in a somewhat random order!

The market he goes to looks like the area at the bottom of Gumstool Hill in Tetbury.

I believe the farm is somewhere near Dursley, and the road with the milk churns beside it is on the hill to Minchinhampton that’s directly opposite the Weighbridge pub.

The tight right hand turn he drives his Land Rover with trailer around while drunk at the beginning of the film is again the bottom of the hill out of Avening, heading towards Tetbury.

The photos were taken from the TV screen so aren’t very good, but if you want to see the area in the early 70s check out the film, which you can buy via the Amazon link below.

Buy Dulcima on DVD from Amazon 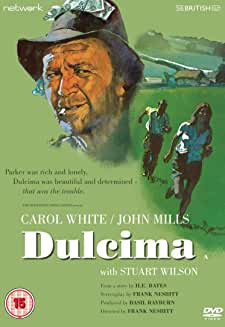 Photos are copyright of presumably EMI films who were the production company.