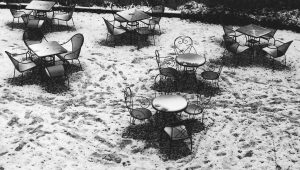 It was forecast last week on a yes it will, no it won’t basis so we played the will it, won’t it waiting game.

The result was it snowed big time, starting in the very early hours of darkness on Sunday when it was forecast as rain. The snow continued for most of the day, and with the temperatures not really getting above freezing all day it wasn’t in any hurry to melt.

Reports on social media (ok, Facebook and Twitter) told us of lots of fallen trees which wasn’t surprising. The snow felt wet and heavy as I discovered when opening the cars tailgate, so would have been a big weight on trees.

It often snows in the run up to or just after Christmas in these parts, although this year I think it was a little earlier than normal. Needless to say there is now a long list of schools that will be closed tomorrow. When I went to school I only remember being sent home early once, and that was because the coaches to take people home wouldn’t be able to get up the hill.

And ironically, the weather caused the ice rink at Gloucester Quays to close going by this tweet! 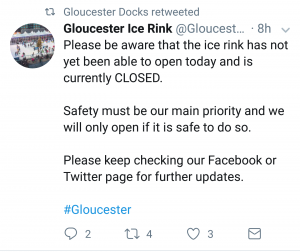