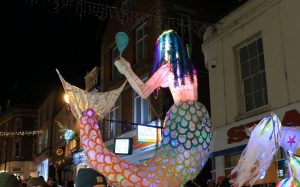 The Goodwill Evening burst into life today at 6pm with large crowds gathering on the Sub Rooms forecourt for the procession around the town.

The theme appeared to be sea creatures going by the number of illuminated erm, sea creatures being carried around by groups from local schools. Fake (don’t tell Trump) snow was sprinkled from a snow machine on the balcony while the very realistic cold weather was provided by a clear moonlit night sky.

While the old Citroen van that sells flowers on the forecourt is a nice edition during the week, it was sort of completely in the way tonight with the large crowds. No matter, the Rock Choir put in a fabulous rendition before the procession that appeared to be led by The Peoples Republic of Stroud with their wonky star set off.

Photos are in the gallery, and video on YouTube.