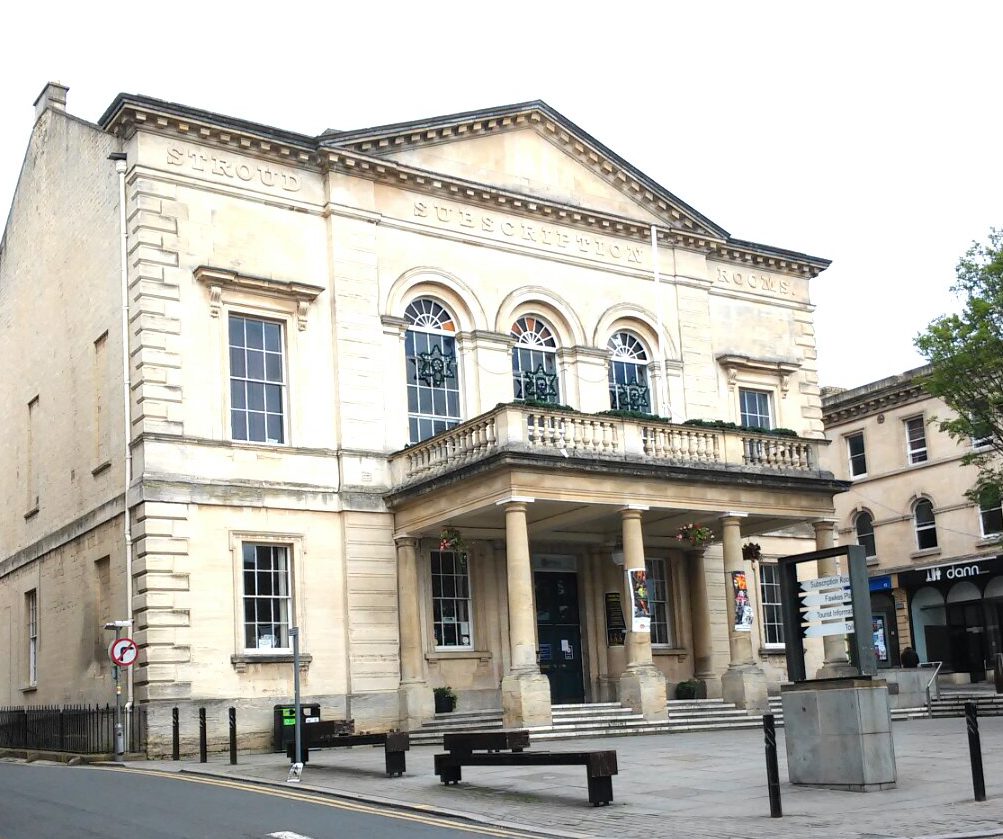 Unless you’ve been living under a rock for the last few months you can’t fail to have noticed that the Subscription Rooms in Stroud are up for sale.

Rather than me rewriting most of what has already been written on the subject I have published a copy of a leaflet that’s being handed out from the Keep our Subs Public stall that’s usually up the High Street at the moment.

Another good article is on Medium that I have linked to at the end of the page. 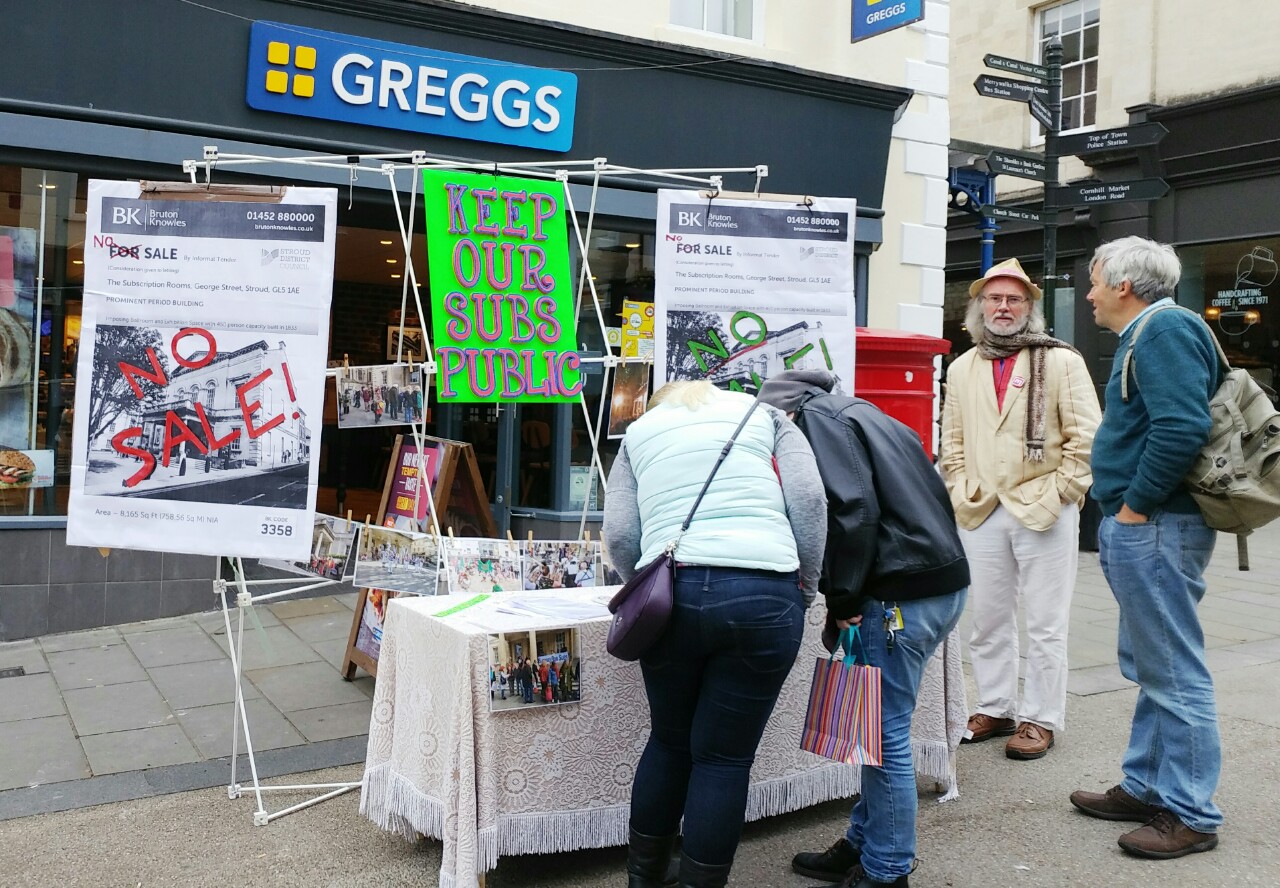 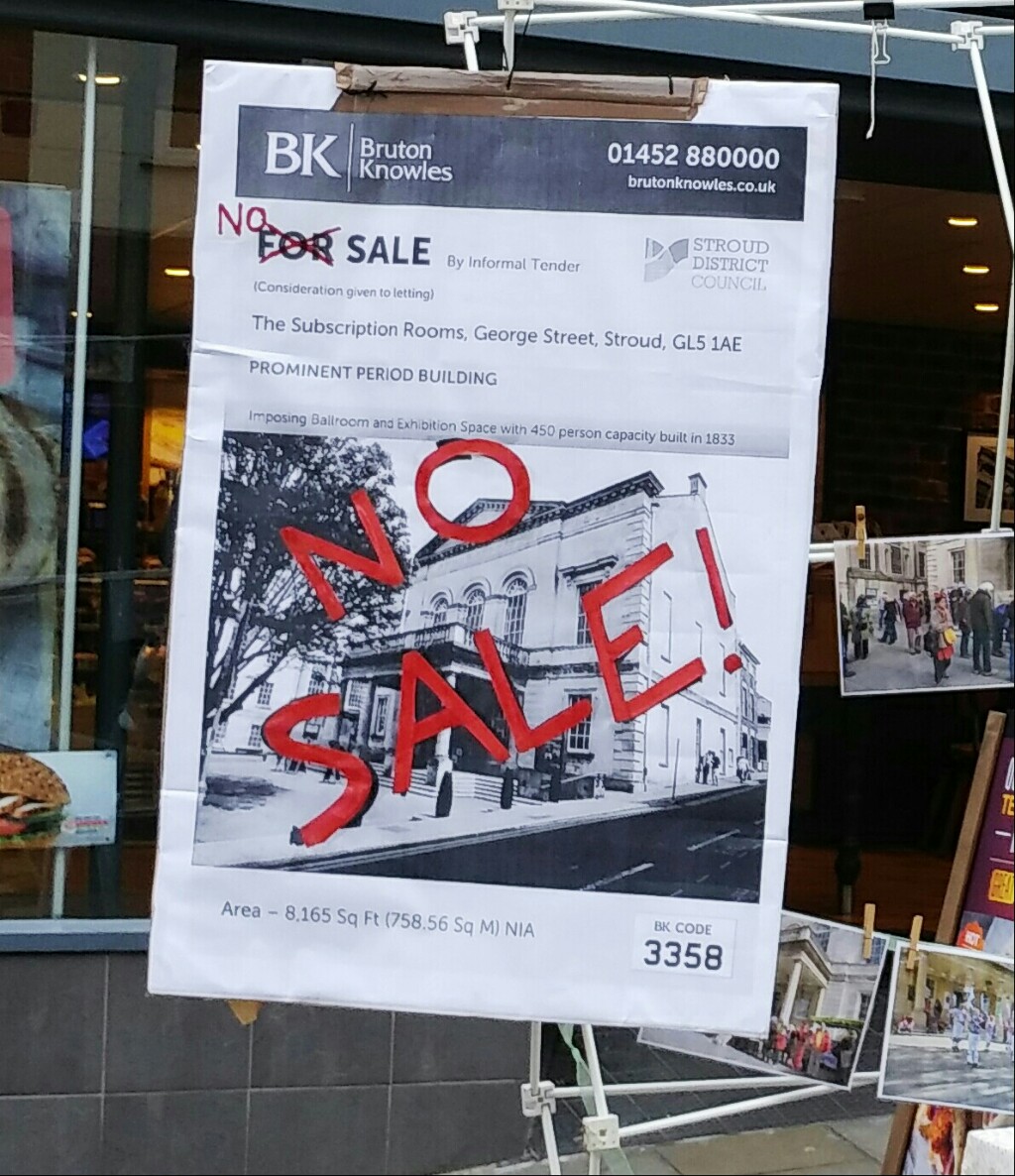 The below is from the leaflet that’s being handed out to the public.

In January, Stroud District Council (SDC) set up a ‘task and finish group’ to invite bids for the future management and ownership of the Subs. The deadline for submissions or offers came on 15 September, and we understand that only two bids were received, one from a new Stroud Town Trust set up by the Town Council, and one from Ecotricity.

No details of the bids were published by the District but the Town Council has now unilaterally published its bid (https://stroudtown.gov.uk/2017/10/30/subscription-rooms-bid) and called on the District for full disclosure. The District’s has not published its decision-making process but it has now been leaked that the Ecotricitv bid is preferred.

You need to let the Council know what you think. SEC is arranging a ‘consultation event’ on 18 November at the Sub Rooms. The timing looks cynical, and we need to press the Council to make it a genuine public consultation.

Whatever Ecotricity’s motives, history tells us that it makes no sense to hand the Subs to a private company: the only reason they are now owned by SDC is that in 1960 the private company which had owned them gave up, defeated by the then running costs!

The Subs were rescued by the Urban District Council in 1960 precisely because there was not a viable business for a company which needed to make a profit. It is worrying that the Council is proposing to sell the freehold, rather than a lease.

This is a community asset and should be owned by the community — by all of us. Once the freehold is sold, it is gone for ever, and the Sub Rooms future will never be secure.

The determination to make a sale rather than to gift the property has skewed this whole process; the Town Council’s bid is £l while Ecotricity’s is said to be £300,000, but profit should not be the only consideration: the Subs needs a sustainable, secure future and its management needs to be democratically accountable.

The square in front of the Subs is also included in the sale. Whatever happens, the square should remain in public ownership, and not be privatised; the cancer of privately owned and controlled public spaces is eating away at the fabric of towns and cities across the UK.

The District Council will make its decision on 5 December.

If you want to object, write to Cllr Doina Cornell, chair of the Task and Finish group, (ccllr.doina.cornell@stroud.gov.uk), and copy to your local councillor https://www.stroud.gov.uk/council-and-democracy/your-councIllors/your-councillors-by-name , and to the leaders of the main parties:

You can copy in our MP David Drew (david.drew.mp@parliament.uk).

And let the councillors know that you’re copying your letter to the local press, communitynews@stroudnewsandlournal.co.uk and citizen.letters@glosmedia.co.uk

Another good write up on it can be found on Medium: