In the dim distant past this was known as the Stroud Show (still might be, different people call it different things) and was preceded by a procession of floats driving around Stroud. There used to be an arena where motorcyclists would jump through hoops of fire and people with parachutes would jump out of a small plane and land on ‘the spot’ so to speak. Those days have long since gone as has the ‘half to Stroud’ bus journey from Chalford to Stroud on the 421 for 10p!

Apparently the show was opened by the local Points West TV programme at 10:30. Considering how appalling the summer has been this year the weather wasn’t too shabby and it didn’t rain!

The format is the same most years, the local wildlife (and other) charities are there including the local bee keepers with their see through section of a hive and various breeds of bored looking cattle and sheep in pens are out on display so little tarquin can get his first proper look at farm animals. Or where his lunch comes from. 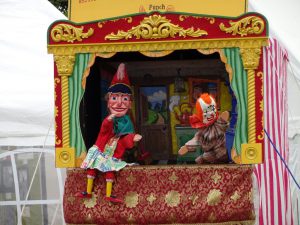 A punch and Judy show was running that probably brought back a lot of memories to us older folks who remember first seeing Mr Punch at the seaside. I thought that with political correctness these days all that hitting and punching stuff had all been banned but obviously not!

Lots of stalls, brass bands, craft stalls and visitors suggest it’s still popular and the local Stroud model engineers society were running trains and giving rides on the miniature railway in the park. Even Strouds well known Clover was there with his keyboard.

The miniature railway was running a proper steam engine and a couple of yesteryear diesel models that are actually electric and powered by a car battery!

Click on the image below to load a bigger version. But only if you want to..